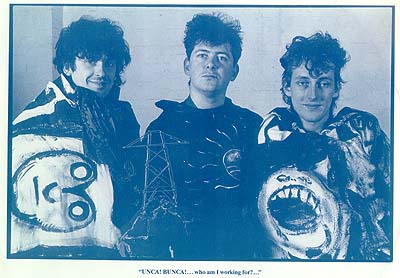 Broadcasted live by VPRO Radio for  “Spleen”, a weekly, Sundays only, radio show.
The Three Johns were a Post Punk/Indie Rock band formed in 1981 in Leeds, originally consisting of The Mekons co-founder, Jon Langford (guitar) as well as John Hyatt (vocals) and Phillip “John” Brennan (bass), augmented by a drum machine.

The band initially formed just before the wedding of Prince Charles and Diana Spencer, and their first gig was to be part of  “Funk The Wedding” event, but they were refused permission to play because they were drunk.They signed to CNT Records in 1982, which Langford jointly founded, releasing two singles and an EP for the label, including a re-working of the Mekons’ “English White Boy Engineer”, which attacked hypocritical attitudes towards South Africa and apartheid, the band being labelled as left-wing rockers.

“We’re not a socialist band. We’re a group of socialists who are in a band. It’s a fine distinction but an important one”

During the band’s career, the members maintained their day jobs – Langford as a graphic designer and Hyatt a teacher of Fine Art at Leeds Polytechnic.

The band’s left wing leanings were further evidenced by the “Atom Drum Bop” album, the sleeve carrying the words “Rock ‘n’ Roll Versus Thaatchiism”, a reference to then Prime Minister Margaret Thatcher.

The band split up in late 1988 after a disastrous US tour, but reformed in 1990, releasing Eat Your Sons, a concept album about cannibalism, before splitting again. Langford continued with The Mekons, later releasing a solo album, while Hyatt concentrated on his academic career.

The band recorded six sessions for John Peel’s BBC Radio 1 show, and reached number 14 in the 1985 Festive Fifty with “Death of the European”.

10 Fire Pits was also played but not broadcasted

Another One From The Box Of Old Tapes !!