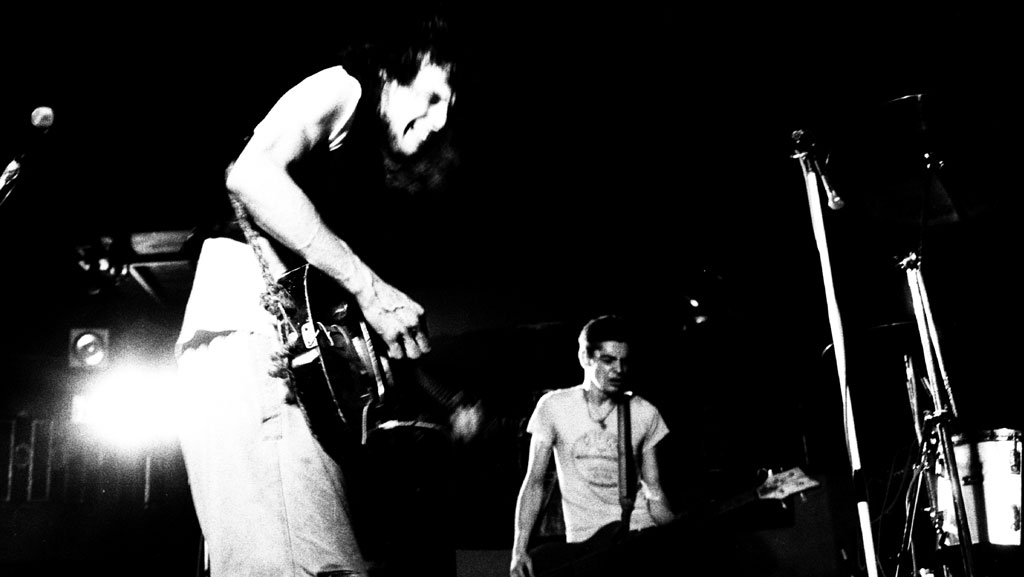 World Domination Enterprises were a British independent rock band who were active in the 1980s. The band mixed elements of indie rock, industrial music, and dub.
Their sound was defined by their atonal guitar. They were best known for their cover version of LL Cool J’s “I Can’t Live Without My Radio”, and early single “Asbestos Lead Asbestos”, which was first performed by singer/guitarist Keith Dobson’s defunct band The 012.
The band was linked with the Mutoid Waste Company, and played at many of their events, as well as CND benefits. Much of the back catalogue is now deleted, though “Asbestos Lead Asbestos” can still be found on the Mute Records 2003 sampler Post Punk Vol. 1
Keith Dobson is also known as Kifkif Le Batteur, who played in English Psychedelic/progressive/space rock band “Here and Now” and, togeteher with Daevid Allen and Gilly Smyth in “Planet Gong”
Their myspace.com page tells us:
Consisting of three members: Founder Keith Dobson on guitar and vocals; Steve Jammo Jameson on bass and Digger Metters on drums, World Dom came into being on Guy Fawkes Day 1984, and played their last show in May 1990.
Grown up on the streets of Ladbroke Grove in West London. A manifestation of the hard, crazy and colourful life of the UK’s squatlands in Thatcher’s heyday.
WDE released only two albums, “Let’s Play Domination” in January 1988 and “Love from Lead City” (late 1988). “Let’s Play Domination” sustained a place in the top three of the UK Indie Charts and the band were featured on the covers of Melody Maker and NME.WDE preferred the short sharp napalm attack of the vinyl single and released five of these, one in each of the last five years of the 1980’s. “Asbestos Lead Asbestos” (1985); “Catalogue Clothes” (1986); “Hotsy Girl” (1987); “I Can’t Live Without My Radio” (1988); and “The Company News” (1989).